Earlier this week, we wrote about a package of proposed bills submitted by the New Jersey Assembly Democratic Caucus, designed to provide relief for New Jersey citizens suffering the impacts of the coronavirus pandemic (“Coronavirus”). Specifically, we focused on three proposals designed to address some the employment-related impacts of the virus: missing work due to illness or family-care needs, missing work due to job closure, and the potential for employment-related retaliation taken against those individuals who missed work due to one of the impacts of the virus.

These three bills – A-3846 , A-3847 , A-3848 were each passed by the State Assembly on Monday, March 16th.  Although the Assembly ultimately passed each bill, they were not passed with equal support: A-3846 and A-3848 were passed unanimously (65-0), while A-3847 passed with 56 votes in favor compared to 4 votes against and 5 abstentions. This third bill, a bill that would provide paid sick leave to certain local government employees without requiring those employees to first use up any accrued leave they might have, was clearly the most contentious of the three.

Once these bills were sent to the State Senate for review, the contentious nature of A-3847 remained apparent: the Senate has neither voted on nor taken any action with regards to the bill. In comparison, on Thursday March 19th, the Senate mirrored the Assembly and unanimously passed versions of A-3846 and A-3848. Thereafter, on Friday March 20th, Governor Murphy signed the second of these bills, A-3848, into law. This bill prohibits employers from retaliating against any employees who missed work or requested time off of work due to the Coronavirus, if such request or medical leave was made or taken pursuant to a recommendation from a medical professional. The remaining bill, A-3846, remains on Governor Murphy’s desk and will likely be approved and passed into law in the days or weeks ahead.

END_OF_DOCUMENT_TOKEN_TO_BE_REPLACED

It is unknown how many workers across New Jersey will fall ill with COVID-19 or be quarantined as a result of a Coronavirus exposure. Many school districts across New Jersey have already closed, with more anticipated to be closed imminently.  Many New Jersey working families will need to take FMLA or other form of leave from work as a result of a family member or themselves for contracting COVID-19, or simply to care for children not in school. 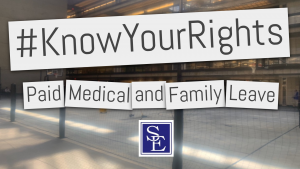 If a New Jersey employee tests positive for COVID-19 or has symptoms consistent with COVID-19 and is unable to work, there are several possible state programs under which he/she may be eligible.  The employee may use accrued Earned Sick Leave. All employers, regardless of size, must provide employees with up to 40 hours of earned sick leave per year to care for themselves or a loved one. Earned Sick Leave time may accrue as you work at a rate of one hour per 30 hours worked, or, your employer may give you a “bank” of 40 hours at the beginning of the year. A New Jersey worker exposed to Coronavirus during the course of their work and directed to quarantine as a result may also use Earned Sick Leave during the quarantine period. Earned Sick Leave is also available to employees who are unable to work because their child’s school or daycare was ordered closed by a public official.

END_OF_DOCUMENT_TOKEN_TO_BE_REPLACED

New Jersey is getting closer to becoming the tenth state to enact a paid sick leave law. On Thursday, April 12, 2018, the New Jersey Senate passed  (A1827) and is headed for Governor Murphy’s desk for his signature.  The bill was approved in March by the Assembly.

Certain types of employees are exempt from the bill, namely certain construction employees, per-diem health-care workers and public employees who have sick leave benefits in place. Employees who are employed by temporary employment agencies will accrue the benefits based upon the time they are employed with the agency and not for each separate client they are assigned.  The employer must pay the sick leave earned by the employee at the same rate of pay with the same benefits as the employee usually earns.