Many businesses and schools have or will be closing due to the Corona-Virus.  While some New Jersey workers can still perform their job duties and responsibilities from home, others cannot and will be temporarily or permanently separated from their employment.  For those people who are separated from their employment for COVID-19 related reasons, there are various local, state or federal governmental run programs that provide for paid benefits to impacted workers.  For New Jersey employees who find themselves unemployed due to COVID-19, they two programs that could provide for temporary relief are New Jersey Unemployment Insurance and the “Emergency Paid Leave Act of 2020” program  that was passed into law late Friday night. 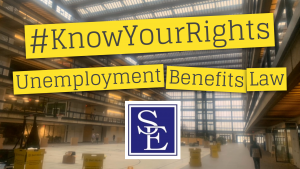 New Jersey Unemployment Insurance Law provides for unemployment benefits for employees who are separated from their work due to no fault of their own.  Employees who are unable to perform their job duties and responsibilities at home during a Corona-Virus related business closing may be eligible to collect unemployment benefits if they meet all other eligible requirements, including the minimum earnings requirement.  Benefits under the New Jersey Unemployment Insurance program are available up to 26 weeks per year.  Eligible employees are paid 60% of his or her average weekly wage earned during the base year, with a maximum week benefit up to $713.  The current maximum total benefit for one worker to receive is $18,538 for 26 weeks of unemployment.

Workers who become eligible to receive unemployment benefits are required to be show they are (1) able to work; (2) actively seeking work; (3) available for work: and did not refuse any offer of suitable work.  While securing a new job during the Corona-Virus pandemic could prove very difficult, any person collecting unemployment benefits should still actively seek for work during their period of unemployment.  This includes applying for any open and available jobs and keeping all documentation to prove he or she conducted a diligent job search efforts should the Department of Labor request the information relating to the job search.

END_OF_DOCUMENT_TOKEN_TO_BE_REPLACED

Under the new unemployment law, misconduct is now defined as follows:

END_OF_DOCUMENT_TOKEN_TO_BE_REPLACED

A New Jersey Appellate Division has reversed a Board of Review decision denying an employee the right to have an appeal hearing after failing to register and appear for the scheduled appeal hearing.  This decision stems from the Department of Labor, Unemployment Division, recent change in its procedures that now requires the employee and employer to pre-register one day before the scheduled hearing before the Appeal Tribunal.  In this case, the employee’s unemployment appeal was dismissed without any opportunity to have an appeal hearing because of the employee’s failure to call and register.

END_OF_DOCUMENT_TOKEN_TO_BE_REPLACED

The New Jersey Appellate Division recently held that an employee, who quit her job in response to being told that she would be fired, can collect unemployment benefits.

In the case Cottman v. Bd. of Review, Dkt. No. A-1908-16T2, 2018 N.J. Super. LEXIS 52 (App. Div. March 29, 2018), the Appellate Division reversed the Board of Review’s decision that found Ms. Cottman ineligible for quitting her job after her child care arrangements fell through requiring her to ask for the day off.  Ms. Cottman was a parent of three children all of whom had special needs and worked the night shift for Quality Management Associates as a residential counselor.  When Ms. Cottman’s babysitter unexpectedly quit, Cottman as per company policy, tried to find a coworker to fill in for her but was unsuccessful finding anyone to work for her. As a result, Ms. Cottman told her supervisor that she would not be able to make it to work for her shift because there was no one to take care of her kids.  Her supervisor responded that she “might” be fired and should not “play with [her] time.”  Upon being told she might be fired, Cottman instead resigned.

When Ms. Cottman subsequently applied for unemployment benefits, she was initially denied after it was determined she had left her work voluntarily and without good cause attributable to her work.  The Appeal Tribunal cited the New Jersey Administrative Code (N.J.A.C.) which includes “care of children or other relatives” in the list of personal reasons that will ordinarily disqualify someone from receiving unemployment benefits. The Board of Review affirmed the decision.

END_OF_DOCUMENT_TOKEN_TO_BE_REPLACED

The Appellate Division has denied an individual from proceeding with her unemployment appeal as a result of failing to appear for the scheduled Appeal Hearing.  In the matter of Boone v. Board of Review, Department of Labor and Workforce Development, and LSA Ventures, LLC, Respondents- No. A-2286-16T3, decided April 9, 2018, the claimant realized the day after the scheduled appeal hearing date, that she had misread the date of the hearing which had been scheduled for the previous day.  After the claimant was unable to obtain a rescheduled date from the Department of Labor, she appealed the decision requesting that she be provided the right to a new hearing as a result of her non-appearance.

The claimant, Sharon Boone, originally filed for unemployment benefits in September 2016.  At this first stage of the unemployment benefits process, Ms. Boone was found ineligible for benefits by the Deputy Director because she left her job voluntarily due to dissatisfaction with her working conditions.   Ms. Boone then appealed her original determination disqualifying her from receiving unemployment benefits and received notice on October 26, 2017 that a telephonic hearing would take place before the Appeal Tribunal, which is the next level in challenging a finding of ineligibility for unemployment benefits. The notice informed Ms. Boone that the hearing would take place on November 14, 2016, at 10:30 a.m. The notice also informed Ms. Boone in upper-case print that she was required to call the Appeals Office 15-30 minutes before the scheduled hearing to register for the hearing.   The notice also indicated that the appeal may be dismissed or that the claimant could be denied participation in the appeal if “you fail, without good cause, to follow these instructions.”

Unfortunately for Ms. Boone, she did not call the Appeals office on the appointed date and time and therefore, the hearing did not take place. The Appeals Tribunal found therefore, that because Ms. Boone had failed to participate in the telephonic hearing, her appeal was dismissed.  On November 15, Ms. Boone subsequently faxed a letter indicating that she had confused the dates and thought her appeal was to take place “today.”  She requested a new hearing date, but the Tribunal declined to reopen the decision.

END_OF_DOCUMENT_TOKEN_TO_BE_REPLACED

Our New Jersey employment law office routinely receives inquiries from unemployed workers who are denied their claim for unemployment benefits after needing to leave their job as a result of a medical condition.  In some situations, the worker should be entitled to unemployment benefits, while in others, they should not receive them.  The answer to this inquiry is not always straight forward.

END_OF_DOCUMENT_TOKEN_TO_BE_REPLACED

The New Jersey Appellate Division has ruled that an employee is not disqualified from receiving unemployment benefits for refusing to submit to a flu vaccination policy for purely secular reasons.

In the case of June G. Valent v. Board of Review, Department of Labor, the employee, Ms. Valent, was employed as a Registered Nurse with Hackettstown Community Hospital (“the Hospital”) from May 11, 2009 through her termination on January 2, 2011. On September 21, 2010, the Hospital’s corporate entity, Adventist Health Care, Inc., implemented a “Health Care Worker Flu Prevention Plan” that required their employees to have a flu vaccine unless there was a documented medical or religious exemption.

Ms. Valant refused to be vaccinated with the flu shot and did not provide her employer with any medical or religious reason.   Although Ms. Valant offered to wear a mask during flu season as a concession for not having to be vaccinated, the Hospital declined her offer and terminated her employment on the basis that she violated her employer’s flu vaccination policy.  If terminating Ms. Valant was not enough, the Hospital then challenged Ms. Valant’s claim for unemployment benefits by claiming that she committed misconduct (“improper, intentional, connected with one’s work, malicious, and within the individual’s control, and is either a deliberate violation of the employer’s rule or a disregard of standards of behavior which the employer has the right to expect of an employee.”) in her refusal to permit her employer to inject her with the flu vaccination.  The Appeal Tribunal rejected this argument and found that Ms. Valant’s refusal to follow an employer’s policy that “was not unreasonable” and approved her claim for unemployment benefits.  The Board of Review, however, reversed the Appellate Division and disqualified Ms. Valant on the basis of simple misconduct.  In the decision, the Board of Review found that the hospital’s policy requiring flu vaccinations was not unreasonable, and therefore Ms. Valant should be disqualified from receiving unemployment benefits.

END_OF_DOCUMENT_TOKEN_TO_BE_REPLACED

If A-3970 becomes law, an employee would be relieved from any contractual obligation not to compete, not to disclose and/or not to solicit if they are found to be eligible for unemployment benefits. An employee is eligible for unemployment benefits if they become unemployed due to not fault of their own. Most disqualifications for unemployment benefits are because the employee either left work voluntarily without good cause attributable to the work or was involuntarily terminated for committing an act of misconduct. The three types of misconduct are gross misconduct, simple misconduct and severe misconduct. Gross misconduct is when an employee is terminated because they committed a crime of the first, second, third or fourth degree under the New Jersey Code of Criminal Justice. Simple misconduct occurs when an employee is terminated because of improper, intentional, connected with one’s work, malicious and within the applicant’s control and is either a deliberate violation of his or her employer’s rules or a disregard to standards of behavior that the employer has the right to expect of the applicant. There currently is no statutory definition for severe misconduct, but there is a bill pending to correct this oversight by the legislature. The Appellate Division has interpreted severe misconduct to be a gap-filler between simple misconduct and gross misconduct.

END_OF_DOCUMENT_TOKEN_TO_BE_REPLACED

The New Jersey Appellate Division recently affirmed the Board of Review’s decision denying claimant, Ms. Nzinga Jackson, New Jersey unemployment benefits, finding she left work voluntarily without good cause attributable to the work. In Ms. Jackson’s initial hearing, the Deputy Director found that Ms. Jackson’s resignation from her position because her union representative told her she would be laid off from work did not constitute voluntarily leaving for good cause attributable to the work. Ms. Jackson appealed the Deputy’s determination. The Appeal Tribunal and subsequently the Board of Review affirmed the Deputy’s decision.

In the case, Jackson v. Board of Review, Ms. Jackson worked for Verizon New Jersey, Inc. (“Verizon”) from February 25, 2008 through September 4, 2010 as a customer service representative. Ms. Jackson accepted a voluntary severance package when her union representative informed her that she would most likely be laid off in the future because of her lack of seniority. Based on that information, Ms. Jackson accepted the severance package and resigned. Ms. Jackson did not confirm that she was going to be laid off with Human Resources or any other Verizon representative. In fact, Verizon did not lay off any employees because an “overwhelming” number of employees voluntary accepted the separation package.

Affirming the Deputy’s initial determination denying Ms. Jackson’s benefits, the Appeal Tribunal rejected Ms. Jackson’s argument that she did not leave work voluntarily without good cause attributable to the work. The Appeal Tribunal stated that acceptance of a voluntary severance package is a valid reason for leaving the job, however it is a personal reason and is not connected to the work itself. During the appeal hearing, the customer service manager testified that Ms. Jackson was not under any direct threat of being laid off if she did not accept the package and continuing work was still available at the time she resigned. Ms. Jackson alleged that she would have been laid off in May 2011, approximately nine (9) months after her voluntary resignation.