On June 29, 2020, the U.S. District Court for the District of New Jersey ruled that consumer goods giant, Amazon, must defend itself in a class action lawsuit brought by warehouse employees claiming violations of wage and hour laws arising from Amazon’s mandatory post-shift security screenings. 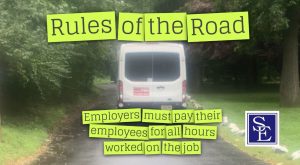 According to the Complaint, at the end of the workday, Amazon’s warehouse employees must submit to a lengthy security screening before they are permitted to leave Amazon’s premises. The lawsuit alleges that the security screening requires hundreds of employees to wait together before each individual must walk through a metal detector and place his or her personal items on a conveyor belt to be scanned via x-ray. If, after the initial screening, Amazon determines that additional screening is necessary, the employee must then report to the secondary screening area for a manual search of the employee’s person. These screenings are intended by Amazon to prevent theft of goods and can take approximately half an hour to complete after the employees have already clocked out of their shifts. Employees are not compensated for the time spent in these screenings.

The Complaint also alleges that the same security screening procedure is required of any employee that wishes to leave Amazon’s premises for his or her unpaid, 30 minute lunch break. Given the vastness of Amazon’s parking lot and remoteness of its premises, the screening allegedly prevents employees from going off site for their meal breaks. The lawsuit claims that Amazon violated federal and state wage and hour laws by failing to count time spent in these mandatory screenings as “hours worked” for purposes of calculating wages and overtime.

The United States Supreme Court has already held that post-shift security screenings are not compensable under the FLSA. However, neither the New Jersey Supreme Court nor any of New Jersey’s lower courts has addressed whether time spent undergoing security screenings is compensable under the New Jersey Wage and Hour Law. The District Court, considering this novel state issue, found that time spent in post-shift screenings would be held compensable while time spent in screenings prior to meal breaks would not be. In making its decision, the Court reasoned that unlike in the case of mandatory security screenings at the end of the workday, which are required in order to exit Amazon’s premises and serve only to benefit Amazon, the act of undergoing a security check during the course of the workday is the consequence of an employee’s choice to take his or her meal break outside of Amazon’s premises and serves primarily to benefit the employee. Indeed, the employee’s choice to exit Amazon’s premises in the middle of a work shift in order to have a meal serves no benefit upon Amazon. Because the Complaint does not allege that employees are “required” to exit Amazon’s premises (and thereby undergo a security screening) in order to take meal breaks, or that the consequence of that choice serves to primarily benefit Amazon, any time spent during meal breaks is not time spent at the “place of work.”

The New Jersey class action is not the first that has been filed by an employment lawyer against Amazon based on the employer’s security screening protocols. In October 2016, a multi-district class action that originated from 5 different class actions brought around the country alleging the same violations, was consolidated in the Western District of Kentucky for resolution. The court in that instance approved a settlement that would provide $20-30 per shift worked to each class member, with a total settlement amount of $3.77 million to be paid by Amazon.

The bottom line for New Jersey employees who are required to undergo security screenings is that clocking in and out of work should occur in a way that will ensure employees are compensated for all of the time they are required to spend at their place of work in the benefit of their employers. Employers utilizing time clocks should allow employees to clock in before any pre-shift screening and after any post-shift screening. In deciding that Amazon must face the allegations in this lawsuit, New Jersey Courts are continuing to give significant consideration to the protections afforded to employees under the New Jersey Wage and Hour Law.