As those of us who are Rutgers football fans know, finding a winning head coach can be very difficult.  Unfortunately, the Rutgers football head coach position has become available three times in the past eight years, which means three expensive and time consuming job searches. While there are always a large pool of candidates who would love the opportunity to be the head coach of Rutgers football, there are always some highly qualified candidates who choose to interview for reasons other than actually wanting the job.  One example is to gain leverage in securing a better contract from their current coaching position.  Another example, is when an unemployed coach who is still owed money under a term contract interviews for a job to prove they are mitigating their damages. 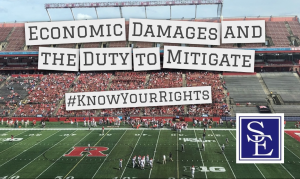 The issue of mitigation of damages has been placed front and center in connection with a federal lawsuit former Arkansas head coach, Bret Bielema has filed against his former employer.  According to news reports, Bielema is being accused by his former for failing to mitigate when removing himself as a candidate for the Rutgers position during the search when it became likely Rutgers would be hiring Schiano.

Bielema sued the Arkansas Razorback Foundation for breach of contract by alleging that the school has failed to pay him $7 million in salary he was owed after his no-cause firing. Arkansas claims, however, that Bielema failed to mitigate his damages for failing to use reasonable efforts to secure a comparable coaching job and instead accepting a much lower-paying job in the NFL. The lawsuit, currently pending in federal court, presents an interesting legal issue that many plaintiffs in employment cases are faced with in litigating their claims of wrongful termination or breach of contract. Did Bielema mitigate the damages he claims to have sustained by his termination.

In New Jersey, if an employee is wrongfully terminated, they can sue their former employer under state laws such as the Law Against Discrimination, the Conscientious Employee Protection Act or other wrongful termination causes of action. In these employment cases, a plaintiff often seeks to recover pay damages, in addition to other available damages. Available pay damages include back pay damages – compensation lost from the date of separation until new employment commences, and front pay damages – the difference in compensation.

To protect their claim and recover pay damages, a plaintiff has a duty to mitigate their damages by making reasonable efforts to find and secure a comparable job to the one from which they were terminated. To determine whether a job is comparable, a jury considers a variety of factors, including the job responsibilities and skills required, pay rate and geographic location. A plaintiff does not have to accept any job that is offered to them just to offset their damages; however, if they have been searching for a job for a reasonable period of time and have been unable to find one, they may be required to lower their sights and consider jobs with lower pay or a longer commute.

So back to Bielema. Bielema was fired by Arkansas in 2017 and given a $12 million buyout with a contract.  The contract stipulated that he make reasonable efforts to regain employment, which in his particular field, would be a head or assistant NFL or high major college football coach. Once he secures a new position, his new salary would then be deducted from the amount owed to him from Arkansas should be prove his breach of contract claim.  By arguing that Bielema failed to mitigate, Arkansas will attempt to cut off any damages owed to Bielema from the moment they can show he was not taking reasonable efforts to secure comparable work. Removing himself from consideration of the Rutgers head coaching job will likely be one of those moments cited by Arkansas.

Bielema ultimately joined the New England Patriots as an assistant coach, making $100,000 initially and then received a raise to $250,000 following a promotion. When he joined the Giants this season, his pay was raised to $400,000, which is still significantly less than he was making at Arkansas and reportedly below market-value for the NFL.

The Razorback Foundation now claims that he did not mitigate his damages as per contract stipulations and seek to recover $5 million paid to Bielema to date. Bielema counters that he applied for several NCAA head coaching jobs, including Rutgers and Colorado, where he was a finalist for both positions. His contract with the Giants also allows him to leave at any time without penalty for a Division-1 head coaching job.

If the case were brought in New Jersey, the court would look to The Razorback Foundation to present evidence that Bielema failed to apply for other comparable jobs to the one he had there. This would mean they would have to show there were other Division 1 head coaching positions open that Bielema failed to make a reasonable effort to secure. If they were able to show this, Bielema would then need to counter with the proof of his job search efforts, including all interviews he went on and positions he applied to, in order to show that he did make reasonable efforts to secure comparable employment, to no avail, before ultimately accepting his position in the NFL.

It would ultimately be up to the jury to determine whether Bielema had met his duty to mitigate his damages by weighing whether he put reasonable efforts into finding a comparable position before “lowering his sights” and accepting a job at a significantly lower pay than he had previously earned. If they were to determine that he had not, then they could lower, or choose not to award, his damages.

Ultimately, this case reinforces the importance that plaintiffs in employment cases take reasonable efforts to secure comparable work after they are terminated from their employment. The more evidence someone has that they made reasonable efforts to obtain comparable work, the better the chance of defeating a failure to mitigate affirmative defense and obtaining all available economic damages.