The absence of pay equity between men and women, commonly known as the “gender wage gap” has been a newsworthy yet unresolved manifestation of gender discrimination for decades. Pay inequities exist in virtually all industries and professions and are not limited to gender disparities. 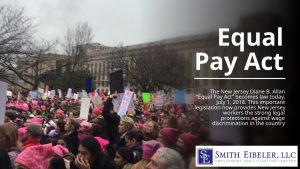 Most recently, one of New Jersey’s premier educational institutions, Princeton University, settled a lengthy dispute over whether it was paying female professors equally to male professors. On average, a full-time professor at Princeton earns over $200,000 per year, but there are variations in pay that Princeton asserts are dependent on department, job performance, and the market-driven economics of filling top spots in academia. But when the U.S. Department of Labor conducted a federal pay discrimination investigation into Princeton’s compensation structure, its findings indicated discriminatory pay practices along gender lines. The Department of Labor’s review of salaries between 2012 and 2014 found that among professors, women were being paid less than men despite holding the same jobs and having the same experience and credentials.

Princeton contested the Department of Labor’s findings for years and still admits no culpability, arguing that the investigation was flawed. It has, however, finally agreed to pay nearly $1.2 million — including $925,000 in back pay and at least $250,000 in future salary adjustments — to female professors, including those who have left the university. Under the Early Resolution Conciliation Agreement between Princeton and the Department of Labor, Princeton will award back pay to the 106 female professors identified by the investigation as having been underpaid between 2012 and 2014 and award future pay raises. Princeton also agreed to analyze faculty salaries at the time of hire and in its annual merit increase process, to make sure there are no future pay gaps between male and female employees. In a statement, a Princeton spokesperson said that the university would engage in hiring initiatives in fields that typically have a low representation of women and encourage women to serve in leadership positions such as deanships. It will also train employees on pay equity.

Although Princeton’s back and forth with the Department of Labor started approximately a decade ago, and arose under federal equal employment opportunity law, it is notable that Princeton’s home state has one of the strongest equal pay laws in the country. On April 24, 2018, New Jersey Governor Phil Murphy signed into law the Diane B. Allen New Jersey Equal Pay Act. The New Jersey Equal Pay Act is named after a retired state legislator who championed pay equity and women’s rights during her 20-plus years of service. It requires that as of July 1, 2018, employees who are in those categories protected from employment discrimination under the New Jersey Law Against Discrimination, must receive not only equal pay, but also equal employment benefits for performing substantially similar work as other employees. The New Jersey Equal Pay Act is therefore, more expansive than simply gender discrimination law because it applies to many protected groups. Protected statuses under New Jersey Law Against Discrimination include gender, race, national origin, age, religion, disability, family and marital status, veteran status, and sexual orientation. The Act also does not require “equal pay for equal work”. Similar work is one of the hallmarks of New Jersey’s law. If an employee, who is in a category protected by the New Jersey Law Against Discrimination , performs almost the same work in most respects as an employee who is not in a protected category, then the protected employee must receive equal salary and all other benefits of employment.

For a showing that an employer has violated the Act, it need only be proven that an employee is a member of a protected category under the New Jersey Law Against Discrimination , performed substantially similar work to other employees and received less compensation. Employers can attempt to demonstrate a legally permissible reason for different rates of compensation, including seniority or merit. A seniority or merit system might lead to differences in compensation based on disparities in training, education, experience, or work produced.

Employers have an on-going duty to implement and maintain a compliance plan and they face severe penalties for failure to do so. Typically, an employee would be awarded compensatory damages, attorney fees and costs if they succeed on a claim of discrimination against his or her employer. He or she may also recover punitive damages if the court finds that the employer’s discriminatory conduct was willful. Penalties under the Act, however, include treble damages (the total amount the employee is owed under the New Jersey Equal PayAct, multiplied by three). Treble damages would also be available to an employee who succeeds on a claim that the employer retaliated against him or her for requesting, discussing with, or disclosing to another employee, a lawyer or any government agency, information related to employee compensation. The same enhanced damages are available to an employee who prevails on a claim that he or she was required, as a condition of employment, to sign a waiver or otherwise agree not to make those types of requests or disclosures. Each paycheck issued in violation of the New Jersey Equal Pay Act constitutes a separate transgression and starts the six-year statute of limitations over again.

New Jersey’s Diane B. Allen Equal Pay Act is one of the most robust equal pay statutes in the country. Employers whose pay practices result in unequal pay for employees who do substantially similar work must take steps to remedy any differences that could be attributed to membership in a protected class. Our experienced employment law attorneys will continue to make sure that victims of pay discrimination are made whole.