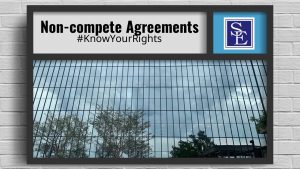 The court found that a standard geographic restriction only imposed mild harm to an employee and was therefore enforceable, and likewise that restricting an employee from soliciting ADP clients with whom the employee had previous relationships with was not unduly harmful and thus enforceable. However, the restrictive covenant agreements went further and provided that the employees were barred from soliciting business from any and all current or potential clients of ADP for one year. The Appellate Division held that this went too far, finding the provisions to be anti-competition, vastly overbroad, and overreaching.

The Appellate Division’s opinion provides some much-needed clarification as to the permissible scope of restrictive covenant agreements. The opinion upheld the long-standing principle that employers have to be able to protect their legitimate business interests which are threatened by departing employees who have learned valuable and sensitive information about their employer’s business. The opinion also reaffirmed the importance of an employee’s ability to work in their field and earn a living. Balancing these competing interests, as the Appellate Division did here, is the only way to fairly resolve a dispute over an restrictive covenant agreement.

In recent years, restrictive covenant agreements have become more and more prevalent, and employees have been subjected to greater and greater restrictions on post-employment activities. Often, as was the case in Kunis, large corporations impose overly broad restrictions on their employees, knowing that those employees don’t have equal bargaining power and have no choice but to consent. This opinion will serve as a repudiation of some of those overreaching employer tactics and provide ammunition for employment lawyers to attack overly burdensome restrictions.