In our recent political climate, the First Amendment and protected speech have been prevalent topics of public discourse. The conversation around our constitutionally protected right to express ourselves freely often focuses on the words and actions of adults, especially adults in the public eye. But free speech is a right that extends to children as well, and now our nation’s highest court will be deciding how a student’s First Amendment right to free speech coexists with a public school district’s right to control certain forms of student expression. 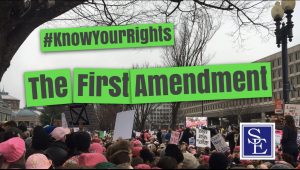 Brandi Levy was 14 years old when she found out she didn’t make the varsity cheerleading squad at her high school. In response, she and a friend posted a video to Snapchat in which they put up their middle fingers and said “F— school, f— softball, f— cheer, f— everything.” The girls were off campus during non-school hours and posted to a personal social media account. But the “chat” made its way to her coaches at Pennsylvania’s Mahanoy Area High School, and in response, Brandi was cut from the cheerleading squad for the entire year. The coaches’ reasoning was that Brandi’s post violated team rules to be respectful, avoid profanity and refrain from putting any negative information regarding Cheer on the internet. When the athletic director, principal, superintendent and school board all refused to reverse the decision of the cheerleading coaches, Brandi and her parents filed a federal lawsuit with the help of the American Civil Liberties Union (ACLU).

In 2017, the United States District Court for the Middle District of Pennsylvania granted Brandi’s request for a preliminary injunction stopping the school from removing her from the cheerleading squad and barring it from enforcing its ban on students’ speech off campus. The court found that, at that stage of the proceedings, Brandi had successfully shown the court that she was likely to succeed on the merits of her case and suspending her violated her First Amendment rights. The court based this decision on its view that Brandi’s off campus speech was not disruptive to the school’s operations and therefore, the school had no authority to control it. Brandi rejoined the JV squad for her sophomore year, but her lawsuit was years from being over. In the meantime, she continued cheering, making varsity both her junior and senior years.

In 2019, the same judge who had granted her preliminary injunctive relief granted Brandi’s motion for summary judgment against the school district. He held that a public school cannot lawfully remove a student from an extracurricular activity in response to her use of profanity off school grounds and outside of school hours. Her words, despite being irreverent, were constitutionally protected by the First Amendment.

The school district appealed to the United States Court of Appeals for the Third Circuit, and in 2020, the trial court’s decision was affirmed in favor of Brandi. The Circuit Court stated, “Public school students’ free speech rights have long depended on a vital distinction”: school authority often wins when speech occurs during school hours and on school grounds, but when it happens outside those parameters, schools have no more authority over student speech than any other arm of government. Noting that social media and advanced methods of digital communication have blurred those lines, the Court was unequivocal that the authority of school administrators does not extend to off campus speech.

On appeal to the United States Supreme Court, the school district’s argument is that allowing the Third Circuit’s ruling to stand would be dangerous. They contend that school authority to discipline student speech, whether on campus or off, allows the school to protect its students and maintain the proper order and functioning of the school. It points to bullying as an example of when the school must exercise authority to protect its students from harmful speech even when it takes place off school grounds. In its brief, the school states, “Students who encourage classmates to kill themselves, target black classmates with photos of lynchings, or text the whole class photos of fellow students in compromising positions, do not limit their invective to school hours.” The school was joined in its argument by a coalition of anti-cyberbullying groups that are concerned about the impact this decision could have on student victims of harassment. But the Third Circuit did not address the issue of student speech that was harassing or threatening, so its decision, even if upheld, may not have such far reaching implications in the world of cyberbullying.

The Supreme Court heard oral argument from both sides on April 28, 2021, and a decision is expected by the end of June. Chief Justice John G. Roberts, Jr. has been a staunch supporter of the First Amendment, but generally, when these cases involve student speech in public school, the argument in favor of protecting speech is harder to make. Brandi and the ACLU argue that shouldn’t be the case. The threat of punishment by an arm of government that is meant to prevent someone from speaking is a violation of the First Amendment in virtually every public place. It’s about time that threat was extinguished in public schools as well.