This month the New Jersey Coalition Against Sexual Assault (NJCASA) released its report, “It’s Everywhere, It’s Everything: The Report of the New Jersey Coalition Against Sexual Assault’s 2020 Survey on Misogyny & Sexual Misconduct in New Jersey Politics.” The report publishes survey results received from employees within New Jersey’s political sphere regarding their experiences of sexual harassment and misconduct in the workplace. It also makes recommendations for improving workplace culture around sexual harassment and misconduct, including increased education and training, the development of transparent, predictable reporting processes, and the creation of a culture of accountability in NJ politics. 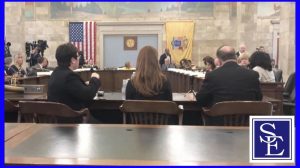 Survey respondents held a variety of positions within state politics, including advocates and activists, state government employees, campaign staffers, lobbyists, partisan political operatives, staffers to elected officials, those holding elected office themselves, legislature employees, and county and municipal government employees. The largest reporting groups were advocates and activists (16%), state government employees (13%), campaign staffers (13%) and partisan political operatives (13%). The vast majority of respondents were white (85%), non-immigrant (94%), heterosexual (81%), cisgender (79%), highly-educated (89%) women (78%). As the report acknowledges, this means that this particular study provides a window into the sexual harassment and misconduct experienced and witnessed by a highly privileged group, and indicates that despite holding such privilege, these respondents were often without the proper resources to prevent, report, or obtain justice in the face of harassment and misconduct in the workplace. The report stressed the importance of interpreting the results as framed and informed by one specific type of woman.

It comes as no surprise that most survey participants (57%) reported having either experienced and/or witnessed sexual harassment and misconduct during their work in NJ politics, and that women are far more often the targets of this misconduct and more likely to report it than men. By occupation, 75% of county government employees reported experiencing harassment, and 77% of campaign staffers and 76% of lobbyists reported witnessing it. When defining the specific types of harassment encountered, verbal remarks and misogynistic comments were the most frequently reported and combined make up 45% of the total. Three percent of respondents reported having been raped. State government employees reported that misogyny is “very prevalent” in their workplaces.