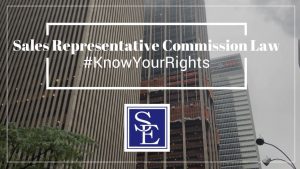 END_OF_DOCUMENT_TOKEN_TO_BE_REPLACED

In the recent case TLE Marketing Co. v. WBM, LLC, No. CV-17-11752 Slip Op. (D.N.J. Sep. 14, 2018) the plaintiff raised a novel argument that, if successful, could expand the reach of the Act.  TLE Marketing Corporation is an independent sales agency based in Minneapolis, Minnesota, and has been providing marketing and sales representation for companies since 1976.  WBM, LLC is a developer, importer, and distributor of a variety of distinctive products, with a primary focus on Himalayan salt products.  WBM is based out of Flemington, New Jersey and has been in business for over 20 years.  Starting in 2007, TLE and WBM began working together, signing a sales representative contract that provided that TLE would market and sell WBM products.  The two companies enjoyed a lengthy business relationship of almost 10 years until, in June 2017, WBM terminated the sales representative contract.  In response, TLE filed a complaint in Minnesota alleging wrongful termination, breach of contract, and failure to pay commissions in violation of Minnesota state statute.