In Wild v. Carriage Funeral Holdings, Inc., the plaintiff, Justin Wild, was employed with the defendant company, Feeney Funeral Home, LLC as a licensed Funeral Director. In 2015, Wild was diagnosed with cancer. His treating Physician prescribed medicinal marijuana as a component of his cancer treatment–primarily to help manage pain. Wild did not disclose this treatment method to his employer, but on days he worked, Wild would only take his prescribed medical marijuana after his shift had ended.

In May of 2016, Wild was involved in a motor vehicle collision during work. Another driver had run a stop sign and struck Wild’s vehicle. As a result of the accident, Wild required medical attention. At the hospital, Wild disclosed to his treating physician that he had a prescription for and had been using medical marijuana to treat his cancer. Upon inspection, the physician concluded the Wild was not under the influence of marijuana at the time of the incident.

END_OF_DOCUMENT_TOKEN_TO_BE_REPLACED 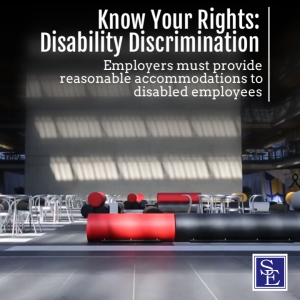 The Appellate Division suggested that, to the extent the use of medical marijuana is limited to non-working hours, it does not translate that an employee is unable to perform their job duties and responsibilities. The Appellate Division’s decision was based upon a lawsuit filed by 41-year old Justin Wild, a cancer patient, who was fired from his employment at a funeral home as a result of his medical marijuana use during non-working hours.

The New Jersey Law Against Discrimination prohibits employers from discriminating against disabled employees. The New Jersey state discrimination law requires that employees provide reasonable accommodations to disabled employees who need assistance in performing the essential functions of his or her job. When an employee provides sufficient notice to his or her employer that they need assistance as a result of a disability, the employer is obligated to work with the employee in an interactive process to determine whether the requested or other accommodation can provided to the employee.  The employer must provide a reasonable accommodation, unless they can show that the accommodation would constitute an undue hardship on their business operations.

END_OF_DOCUMENT_TOKEN_TO_BE_REPLACED

The United States Court of Appeals Third Circuit has reversed a district court’s dismissal of a disability discrimination lawsuit brought by a registered nurse against her former employer. In the lawsuit captioned Aleka Ruggiero v. Mount Nittany Medical Center, the registered nurse claims that she was unlawfully terminated from her employment in violation of the Americans with Disabilities Act (“ADA”) for being terminated after refusing to get required vaccination because of her disability.

The plaintiff, Aleka Ruggiero, was employed as a registered nurse at Mount Nittany Medical Center before being terminated in July of 2015. According to the Complaint, Ms. Ruggiero suffers from severe anxiety and eosinophilic esophagitis, which limited her certain areas of life, including her ability to eat, sleep and engage in social communications. Despite her disabilities, Ms. Ruggiero was able to perform her job duties.

However, Ms. Ruggiero was required by the medical to receive a vaccination for tetanus, diphtheria and pertussis (the “TDAP”) vaccination as a result of her position as a nurse.  After not obtaining the vaccination prior to the deadline mandated by the hospital, Ms. Ruggiero provided a medical note from her doctor that medically exempted her from having to receive the vaccination. Mount Nittany Medical Center rejected the doctor’s note and requested further detail concerning Ms. Ruggiero’s medical inability to get the TDAP vaccination. After the treating doctor provided further information from the treating doctor, the medical center again rejected it as insufficient.  The medical center also rejected Ms. Ruggiero’s request to wear a surgical mask while at work as a different form of reasonable accommodation. After rejecting both reasonable accommodations requests, Ms. Ruggiero was eventually terminated after she missed the new imposed deadline to obtain the TDAP vaccination.