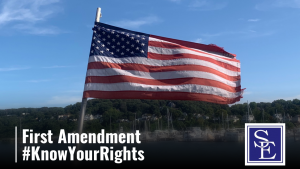 In one local local news website, a blogger exercised his freedom of speech to attack the high school female student  by called into question the veracity of her claims of racism in Middletown. The blogger linked the blog to an interview that Ms. Tulloch had participated in one week earlier in which she mentioned that she had a great experience in Middletown public schools. The blogger suggested that Ms. Tulloch could not have suffered the racism she complains of, because she told the interviewer that she would not want her public education in Middletown to be any other way. The blogger also felt the need to publish Ms. Tulloch’s parents’ places of employment in a transparent attempt to show that life cannot be too bad for Ms. Tulloch because her parents have good jobs.

Many comments on the blog were critical of the blogger’s written piece and accused him of unfairly criticizing Ms. Tulloch and engaging in “click-bate.”  Other comments continued the criticisms of Ms. Tulloch for speaking on issues of racism within the town.

Hi, I’m Jada. I just saw your post regarding my Senior Spotlight interview and my apparent “contradictory” response. When I responded to that question I made sure to choose my words wisely to keep some integrity and reverence to and for myself. When I said “I would say I’ve had a great experience in Middletown public schools since elementary school, just because of the amazing people and amazing teachers I’ve met” I made sure to say “just because.” I really don’t accredit any of my success to the institutions themselves, but instead to the wonderful people I have had the opportunity to meet through it, and I completely stand by that. I did not feel the need to bring up the negative experiences I have had with people in that response, because I was focusing on the positive. Hope this clarifies some things, thanks!

Our civil rights law firm strongly supports Ms. Tulloch, and commends her courage in exercising her right of free speech and bringing local attention to the important societal issue of racism. Freedom of speech issues are prevalent in schools across the country and New Jersey remains no different.  Last year, on behalf of Wall Township school teacher, Susan Parsons, Smith Eibeler filed a lawsuit against Wall Township BOE to invalidate a regulation that prohibited students and school employees from speaking to the media without first asking and obtaining permission from the Superintendent. As a result of the litigation, Wall Township Board of Education and the firm, Straus Esmy, who initially drafted the Media Policy, changed the policy to assure that it now complies with the First Amendment and can never be used by a school district as a prior restraint of free speech of students or faculty.  It is refreshing to see a student like Ms. Tulloch exercise her constitutional rights, especially on important issues such as racial inequality.

So do these Board of Education policies reflect the law when it comes to free speech? What do the Courts say about the First Amendment rights of public school students? In Tinker v. Des Moines Independent Community School District, a 1969 United States Supreme Court case, the Court held that districts cannot prohibit speech unless it disrupts the school environment or negatively interferes with the rights of others. Generally, school districts are able to exercise greater control over school-sponsored student expression than they are over personal expression. The reason for this distinction is that school-sponsored speech is presumed to be for the purpose of teaching a specific lesson, is geared toward a particular age group making the maturity of the audience relevant, and can easily be falsely attributed to the school as opposed to the individual speaker.

The United States Supreme Court ruled in 1997 that internet speech has the same high level of constitutional protection as print media. That being said, there is a distinction between what students may post online from their personal computers at home and what they may post online while at school or from a school computer. In the Third Circuit, online expression that cannot be accessed in school has been protected. Courts have also held that school districts lack the authority to punish students for expressive conduct occurring off school grounds. The Third Circuit has said “[i]t would be an unseemly and dangerous precedent to allow the state, in the guise of school authorities, to reach into a child’s home and control his/her actions there to the same extent that it can control that child when he/she participates in school sponsored activities.” Again, the exception to this rule would be when the speech results in the foreseeable and substantial disruption of school.

Since posting her Instagram message, Ms. Tulloch has continued to exercise her first amendment right to speak out against issues of racial inequality.  Ms. Tulloch was even invited on Good Morning America, who she explained why she posted the social media message, “There’s so many issues in my community, but no one really talks about it.  I wanted a wake-up call.”

Ms. Tulloch’s call for attention to the issues of racial inequality have awoken at least some in the town and her high school.  Middletown Students are organizing a “Spread Love, Not Hate” rally to take place at Middletown North High School on June 28. Additionally, a petition has been started asking Middletown public schools to change their curriculum to address the issues of system racism.  The petition has been signed by at least 800 Middletown students, past students, faculty and parents, and continues to grow in numbers.

The impact of Ms. Tulloch’s exercise of her first amendment rights in May has clearly been immense.  Given the state of First Amendment law as it relates to members of the school community, Ms. Tulloch’s expression on social media was without a doubt an exercise of her right to free speech that should be afforded every protection under the law.  Most importantly, Ms. Tulloch has used her First Amendment right to shed much needed light to the issue of racial inequality within her own town.

We applaud Ms. Tulloch’s courage in speaking out about the issue of racism and #ShareTheMicNow to her should she ever want to speak further about the important societal issues of systemic racism on this online forum.