Under the recent New York law, breastfeeding mothers may file an exemption from serving jury duty for two years, requiring only a doctor’s note affirming that they are currently breastfeeding at the time the exemption is filed.  During the signing, Governor Cuomo noted, “While jury service is a critically important civic duty, we also know new moms oftentimes juggle countless responsibilities and navigate enormous adjustments in the early stages of their child’s life,” and that “This commonsense measure takes that reality into account by providing new moms the flexibility and option to postpone jury service while they care for a newborn.”

New York has followed the national trend in enacting similar laws to deal with the issue facing many new mothers in attempting to fulfill their civic duty while also needing to care for their newborn.  In March 2017, a breastfeeding woman in Minnesota took to Facebook  to share her horrific experience when having to serve on a jury while breastfeeding.  As she stated in her Facebook post, Amanda Chandler was granted only two breaks to breastfeed by the clerk and judge and needed to do so in a bathroom.  Ms. Chandler stated, “[s]eems pretty ironic that the very place which is supposed to uphold and enforce the laws would not follow or adhere to them.” 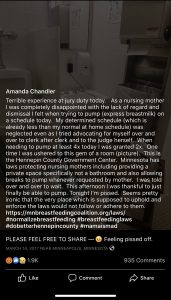 In another reported story out of Ohio, a breastfeeding mother reportedly was denied her request for an exemption from jury duty, which resulted in her having to breastfeed in a courthouse broom closet.  This incident was cited by Ohio State Representative Ann Gonzales in support of her introduction of an Ohio state law that would allow breastfeeding mothers to postpose or be excused from jury service.  The bill was introduced on February 1, 2017 but died in committee.

This legislation marks a victory for mothers in New York who will no longer have to bear the added stress of jury duty while nursing a child. This exemption is designed to make the lives of mothers easier in the years when their children are most dependent on them. This legislation signifies that the state of New York acknowledges that this time is best spent letting mothers focus on breastfeeding and caring for their children and that their civic duty will be available for them to fulfill at a time when their child’s nourishment is not dependent upon them.

New York State Assemblyman Marcos Crespos (D-Bronx) was the sponsor for the bill in the assembly and had been pushing this legislation for years before it finally picked up traction and reached the governor’s desk. Assemblyman Crespos noted that the legislation’s purpose is for the state to prioritize the needs of mothers and their children’s health, first and foremost. State Senator Velmanette Montgomery (D-Brooklyn) was the main sponsor in the state senate. She urged that the law would “provide some real relief to breast feeding mothers.” The bill passed both chambers with bipartisan support and unanimity.

While there may exist legal support that could be used by a New Jersey breastfeeding mother to obtain an exemption from jury duty, the reality is that most breastfeeding women are not employment lawyers, nor are the court administrators responsible for responding to such a request.  For this reason, New Jersey would be well-advised to follow its sister state and amend the Law Against Discrimination to specifically include the right to a jury exemption to a breast-feeding mother.  Such an amendment would be consistent with the already statutory framework in place in New Jersey that protect pregnant and breastfeeding women from discrimination.