New Jersey’s State Policy Prohibiting Discrimination in the Workplace is considered amongst many New Jersey employment lawyers as being one of the least protective of employee rights in the entire country.  Unfortunately, the newest revisions proposed by the Civil Service Commission do not provide any meaningful improvement for State employees governed under the State’s anti-harassment policy, and particularly with respect to how it conducts investigations of claims of sexual harassment.  In fact, when it comes to New Jersey’s controversial “strict confidentiality directive” policy, the proposed changes make the New Jersey’s anti-harassment policy even worse for victims of sexual harassment and discrimination.

The current strict confidentiality directive in place expressly threatens state employees with discipline up to and including termination if the state employee exercises his or her constitutionally protected right to speak out about allegations of harassment within the state workplace. A state employee who makes a complaint of harassment or discrimination, or is requested to participate in a discrimination or harassment investigation, is required under current state regulations and practice to keep all aspects of the investigation confidential.  This means, for example, that if a state employee is the victim of sexual assault or harassment at her state job and she complains about it to the State’s EEO/AA office, she is forbidden under current regulations and practice to tell a lawyer, a co-worker or even her spouse anything about what happened.  The strict confidential directive remains in place and every state employee must abide by it or be subject to discipline.  N.J.A.C. 4A:7-3.1(j), states:

All persons interviewed, including witnesses, shall be directed not to discuss any aspect of the investigation with others in light of the important privacy interests of all concerned. Failure to comply with this confidentiality directive may result in administrative and/or disciplinary action, up to and including termination of employment.

In order to assure that employees adhere to the strict confidentiality directive policy during harassment investigations, the current practice of the New Jersey EEO/AA office is requiring any victim, witness or accused to sign a written document acknowledging their understanding of their silence requirements.  The strict confidentiality directive agreement, that can be found on the State’s website, looks like this: 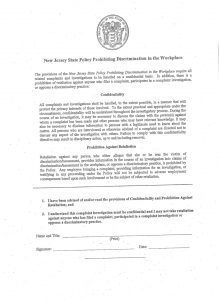 We are unaware of any other state in the country having a similar policy and practice that requires victims and witnesses to sign formal agreements that threaten them with discipline should they break and exercise their constitutional rights to voice their opposition to workplace harassment.

But, it gets worse.  A state employee has no choice but to cooperate in any discrimination or harassment investigation should the EEO/AA believe he or she has relevant information concerning any investigation. If an employee fails to cooperate with the investigation and refuses to be subjected to the strict confidentiality directive, the employee may be subjected to “administrative and/or disciplinary action, up to and including termination of employment.” Thus, a state employee, as a term and condition of employment, must agree to keep his or her silence regarding any issue of workplace harassment or risk his or her state job.

In response to a Wall Street Journal article concerning Katie Brennan’s allegations of being raped during the Murphy for Governor Campaign, Governor Murphy blamed the confidentiality provisions of the state’s anti-harassment policy in part for him never being advised of the rape allegations.  Specifically, Governor Murphy stated, when discussing the investigation — or lack thereof –into Ms. Brennan’s complaints, that “[t]hese processes, within government at least, are confidential and treated confidentially. And that’s for a reason, to make sure that there’s a fairness associated with it.  That you’re not, even inadvertently, putting your hand on the scale. I believe in this case it obviously was followed because we did not hear about it until October 2.”

On February 5, 2019, Governor Murphy issued a press release announcing that the Civil Service Commission is revising the State Policies and Procedures to the Handling of Allegations of Sexual Misconduct Against State Employees and Applicants for Employment through various changes to the existing anti-harassment policy.  The announced proposed revisions, however, did not address any of the State’s confidentiality provisions.  And worse, after the announcement, the Civil Service Commission decided to change the strict confidentiality directive to require EEO/AA officers to issue discipline to any victim or witness who does not comply with strict silence of the harassment investigation.  The New Jersey Register, 51 N.J.R. 192 (February 19, 2019), sets forth the revisions (in bold) to N.J.A.C. 4A:7-3.1(j) as follows:

To the extent practical and appropriate under the circumstances, confidentiality shall be maintained throughout and after the investigative process has been completed.  In the course of an investigation, it may be necessary to discuss the claims with the person(s) against whom the complaint was filed and other persons who may have relevant knowledge or who have a legitimate need to know about the matter.  All persons interviewed, including witnesses, shall directed to not discuss any aspect of the investigation with others in light of the important privacy interests of all concerned.  Failure to comply with this confidentiality directive [may] willresult in administrative and/or disciplinary action, up to and including termination of employment.

Smith Eibeler currently represents several state employees, including in two pending lawsuits concerning the State Policy and the State’s use of the strict confidentiality directive policy.  Our employment attorneys have filed an Order to Show Cause that argues that the State’s confidentiality rules and proposed revisions are in violation of the First Amendment, the Law Against Discrimination and the recently passed Non-Disclosure bill S121.  In two different pending lawsuits, we are seeking on behalf of our clients that the Court strike down the strict confidentiality directive as being null and void.  We also seeking equitable relief to require that the State take appropriate action to revise and reform the anti-harassment policy consistent with Governor Murphy’s stated directive in making New Jersey victim-centric when it comes to workplace sexual harassment. Until there are meaningful changes to the State’s anti-harassment policy, we agree with most employment lawyers that the New Jersey will remain a legally ineffective policy against workplace harassment.

One of the most important aspects of the #MeToo movement is to ensure that employers and sexual harassers are no longer able to keep incidents of sexual harassment in the dark which often results in future victims.  Until New Jersey ends its policy and practice requiring its employees to keep all aspects of any harassment complaint and investigation confidential, state employees who fall victim to workplace harassment will continue to be forced into silence while their incidents of sexual harassment are kept in the EEO/AA’s secret vault away from the public.