A new bill was signed into New Jersey law on July 25, 2019, that furthers a statewide effort to reduce inequality in pay for New Jersey employees.  Because Governor Murphy is out of the state on vacation, Lieutenant Governor Sheila Y. Oliver signed Assembly Bill 1094 into law yesterday after it was passed in the New Jersey Assembly on March 25, 2019 and the Senate on June 20, 2019. The new law will prohibit employers from asking or requiring job applicants to disclose their salary history during the application process. The new law is intended to address continued pay inequality and gender discrimination that has long existed in the employment environment. 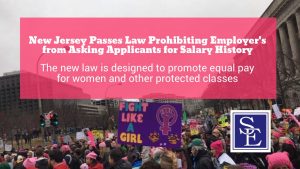 The newly enacted law prohibits employers from screening applicants based on their salary history, including prior benefits. Employers may not utilize any minimum or maximum criteria in relation to salary history to disqualify potential candidates, requiring that the application process be predicated entirely on experience and capabilities as opposed to prior salary and other irrelevant factors. Employers may only request the salary history of their applicants after they have provided them with an offer of employment that includes a compensation package. While employers may utilize an applicant’s prior salary in their compensation determinations if that information is volunteered by the applicant without coercion, an applicant’s denial to provide such information cannot be considered as a factor in any employment decisions.

It shall be an unlawful employment practice, or, as the case may be, an unlawful discrimination:

(3)  For any employer to inquire, in writing or otherwise, about the salary history of a job applicant, including, but not limited to, the applicant’s compensation and benefits, except that the employer may seek the history if the prospective employee voluntarily, without employer coercion, provides the employer with a written authorization to do so.

In passing the new law, the legislature determined that continuing to allow employers to base compensation decisions upon the salary history of applicants perpetuates this wage gap that exists in the state’s workforce. Declaring this practice unlawful is viewed by many New Jersey wage discrimination lawyers and legislatures as another step towards attempting to close the gap. As Monmouth County Assemblywoman Joann Downey stated, “By banning questions about salary history, we can wipe away a history of bias and implicit discrimination, allowing women to start fresh with the compensation that they truly deserve.”

The law will further serve to reinforce the Diane B. Allen Equal Pay Act that was passed in March of 2018. The New Jersey Equal Pay Act is considered one of the strongest equal pay laws in the country.  It prohibits wage disparity based upon a protected class such as sex or race by requiring that employers to pay the same compensation to employees who perform substantially similar work.  If an employee proves that he or she is not being paid the same compensation for the substantially the same work because of his or sex, race or other protected class, an employer can be liable for up to 3 times the amount of the amount of wage disparity, as well as reasonable attorney fees and costs.  The New Jersey Equal Pay Act also contains a broad anti-retaliation provision that forbids employers from taking adverse employment action against employees who engage in protected activity in connection with their compensation. This includes employees complaining or objecting about wage discrimination, discussing any information about compensation with others or attempting to seek legal advice regarding claims of unfair wage disparity.  The bill signed yesterday will act as an enforcement of the values that the New Jersey Equal Pay Act espouses.

Employers can be fined up to $1,000 for the first violation, $5,000 for the second violation, and $10,000 for the third. These fines make continued pay discrimination costly for employers, an important step in eradicating unequal pay practices.  The passing of this law is being touted by New Jersey employment lawyers view this legislation as another win for employees rights.