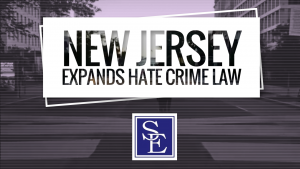 “A person is guilty of a crime of the third degree if the person knowingly places a call to a 9-1-1 emergency telephone system with purpose to intimidate or harass an individual or group of individuals because of race, color, religion, gender, disability, sexual orientation, gender identity or expression, national origin, or ethnicity.”

As the statute is now written, there is no additional criminal penalty when the underlying crimes are racially motivated. If a person is found guilty of calling 911 as a way to harass someone based on his or her race, that will be considered one third degree crime.

When speaking about the amendment, Governor Murphy stated, “Using the threat of a 911 call or police report as an intimidation tactic against people of color is an unacceptable, abhorrent form of discrimination,” and “Individuals who choose to weaponize this form of intimidation should be held accountable to the fullest extent of the law.” Governor Murphy called these types of hate crimes irresponsible and dangerous, and lamented that they can cause distrust among the state’s residents, dividing people along racial lines. New Jersey Attorney General, Gurbir Grewal, said that false 911 calls interfere with 911 emergency operations and “put law enforcement at risk.”

The legislation comes just months after a Black man recorded a white woman calling 911 and falsely reporting that he was threatening her after he asked her to put her dog on a leash in New York City’s Central Park. His cell phone video went viral, accumulating more than 40 million views on Twitter, and influenced a similar law being passed in New York City. Race-based 911 calls have been front and center in the media recently, and have earned the white women often placing them the colloquial name “Karens.” Hate crimes do not have to race-based, however. As stated in the statute, hate crimes can be committed against any protected group, and can be based on characteristics such as ethnicity, religion and sexual orientation. Last month, a white man in Howell, N.J. pleaded guilty to bias intimidation after sending Facebook messages threatening assault with a baseball bat against members of Lakewood’s Jewish community. In April, an Atlantic County man was charged with a bias incident after he allegedly set a parked van on fire and threatened its owner because he was Mexican. These crimes need not be committed by white perpetrators either. Last year, two17-year-old boys of Indian descent were arrested and charged with bias intimidation after allegedly using racial slurs and urinating on a group of four African American middle-school girls at a Lawrence High School football game. Bias intimidation can happen in the workplace as well. In April 2007, two Public Works employees in Gloucester, N.J. lured an African-American co-worker into a storage cage in the township’s Public Works building, locked the cage for several minutes and mocked their victim saying, “You throw a banana in the cage and he goes right in.” Although the two men arrested and charged in the incident claimed it was only a prank, a jury convicted one of them under provisions of the state’s bias intimidation law.

As the state’s hate crime statute expands, our discrimination attorneys will continue to ensure that victims are protected under these changing laws. By enacting the new bias intimidation bill, the state has moved toward a safer and more equitable system for addressing the pervasive problem of discrimination in New Jersey.