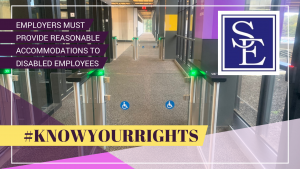 Following this unlawful termination, Ms. Tynan filed a complaint alleging disability discrimination. In this complaint, Ms. Tynan argued that her former employer had neglected to engage in an interactive process to reasonably accommodate her disabilities. The trial court dismissed her complaints, and she appealed.

The Superior Court affirmed the trial court’s dismissal of several of Ms. Tynan’s complaints, including her claim that she was subject to a hostile work environment and intentional infliction of emotional distress. However, the Superior Court agreed that Ms. Tynan’s claim that her employer failed to accommodate her disability needed a closer analysis. The court explained:

The Vicinage argued that Ms. Tynan failed to request an accommodation for her disability, stating that disabled employees must make specific requests advising their employers of exactly what accommodations they seek. The Superior Court denied this argument. They instead held that employees need only “make clear that…assistance is desired for his or her disability.” The court further held that a request for accommodations needn’t be in writing. Instead, once an employer is notified of the disability and a desire for accommodations, even if this notification is informal, it becomes the responsibility of the employer to implement the interactive process to determine if a reasonable accommodation is possible.

Ms. Tynan notified several supervisors of her disabilities and belief that they were exacerbated by working with her supervisor. She expressed her desire for a variety of accommodations, including an extended medical leave, the ability to report to a different supervisor, and a transfer to a different position. Instead of investigating the possibility of such accommodations, Vicinage 13 terminated Ms. Tynan’s employment. As the court states, “[A]n employer who acts in bad faith in the interactive process will be liable if the jury can reasonably conclude that the employee would have been able to perform the job with accommodations.” As a result of the aforementioned facts, the Appellate Court held that Tynan’s failure to accommodate claim should not have been dismissed on summary judgment and should instead be determined by a jury.

The Tynan v. Vicinage decision continues to be frequently cited by New Jersey employment lawyers in cases of disability discrimination and failure to accommodate.  The case remains an important example of the extent of the duty of employers to engage in good faith in an interactive process with a disabled employee prior to making a decision to terminate an employee because of a disability.