In a demonstration of support for and solidarity with New Jersey employees that have experienced sexual harassment and sexual assault in the workplace, Governor Murphy signed Senate Bill 2986, nicknamed the “Panic Button Bill,” on June 11th, 2019. This bill was introduced to the New Jersey Senate in September of 2018 and, with Governor Murphy’s signature, will take effect in January of 2020. Governor Murphy claims that, with its passage, New Jersey becomes the first state nationwide to enact legislation of its kind.  The  passing of the legislation is another victory for employees, and particularly victims of sexual harassment in the #MeToo movement. 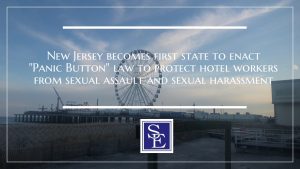 In an effort to recognize the prevalence of sexual misconduct in specific areas of employment, the New Jersey Senate has targeted the hospitality industry with regulations intended to protect hotel employees from facing such unlawful behavior. The bill states, “[d]ue to the unique nature of hotel work, hotel employees are particularly vulnerable when working alone in hotel guest rooms…this solitary work places them at risk of assault, including sexual assault, and sexual harassment.” This statement was proven true by a horrific case of sexual assault that occurred in 2018, when a 51-year-old house keeper at Billy’s Casino in Atlantic City was forced into a hotel room and sexually assaulted by a guest. This criminal act sparked a widespread demand for safer working conditions for hotel employees.

As a method of ensuring greater protection for New Jersey employees, the Panic Button Bill will require hotel employers to provide “panic devices” to all employees assigned to work alone in guest rooms. To quote from the bill, these devices can be used when an employee “reasonably believes there is an ongoing crime or immediate threat of assault or harassment, or other emergency in the employee’s presence.” When activated, the device alerts an appropriate staff member, such as a security officer, and thus provide the employee with immediate assistance, support, and protection.

Once an employee activated their panic device, the bill requires that employers notify all other hotel employees of the incident and of the possibility that there is a hostile guest in the building. The bill requires that the employer then provide all employees with the option  to not service that guest’s room for the remainder of their stay, with protection provided against retaliation by the employer against employees who exercise that option. Employers are also required to report any unlawful conduct to a law enforcement agency for further investigation. The bill further dictates that employees who utilize these buttons should not face any adverse action as a result of employing the panic devices, thereby declaring that any retaliation for their use would be illegal. Employers who do not comply with the bill can be fined up to $10,000 for each violation.

Finally, another important aspect of this bill is that it extends not only to hotel employees, but to anyone who performs “housekeeping or room services duties at a hotel for or under the direction of the hotel employer or any subcontractor of the hotel employer.” In the hospitality industry, it is not uncommon for employers to utilize subcontractors to perform certain functions, such as housekeeping. This bill understands this reality and provides equal protection for the vulnerable people being placed in potentially dangerous situations, regardless of their formal employment status. The bill recognizes that the hotel employer, ultimately, should be responsible for providing a safe and harassment free workplace for all persons working on their premises, as the Law Against Discrimination envisions.

This bill is an important recognition by New Jersey of the legitimate fear of retaliation that may result from complaints of unlawful behavior that many hotel employees harbor. It acknowledges that many hotel employees are “marginalized members of society” who may have limited methods of supporting themselves and their families. As a result, these employees may reasonably fear repercussions related to reporting unlawful conduct. Lawmakers hope that the Panic Button Bill will provide employees with reassurance that their employers support their right to work without fear of sexual harassment or sexual assault, therefore providing greater comfort in reporting wrongful behavior.

If you feel that you or a family member have been a victim of sexual assault, sexual harassment, or retaliatory action after reporting unlawful behavior, it is important to contact an experienced New Jersey sexual harassment attorney today to review the specific facts and circumstances concerning your potential claim