In the midst of a national discussion regarding sexual harassment in the workplace, the laws prohibiting such egregious behavior as well as the methods of reporting and investigating related complaints have come under scrutiny. Many businesses across the country are reviewing their anti-harassment policies to become legally compliant and limit their liability when sexual harassment occurs at their workplace. In New Jersey, a claim of sexual harassment was first recognized in 1993, in the landmark New Jersey Supreme Court case Lehmann v. Toys ‘R’ Us. Commonly referred to as Lehman by New Jersey employment lawyer and judges, this case set the standard for stating a cause of action for a claim of sexual harassment that created a hostile work environment.

In 1986, Ms. Theresa Lehmann’s employment with Toys ‘R’ Us was drastically altered upon the hiring of Don Baylous as the Director of Purchasing Administration. Under his supervision, Ms. Lehmann and her female coworkers began to experience pervasive sexual harassment that varied from sexualized comments about Ms. Lehmann’s breasts to an instance where Mr. Baylous physically pulled Ms. Lehmann’s shirt over her head to expose her breasts. Ms. Lehmann attempted to report the conduct to several managers, but very little was done to remedy the situation. Instead of addressing Mr. Baylous’s behavior, Ms. Lehmann was offered a transfer to a different department. She rejected this, and later resigned as a result of the harassing conduct and the retaliation she experienced from reporting it. In response to this inadequate managerial reaction, Ms. Lehmann submitted a formal legal complaint of sexual harassment that was initially heard by a trial court. The trial court dismissed all causes of action except battery. Ms. Lehmann appealed, and the appellate court reversed the trial court’s dismissal of her claims of a hostile work environment brought on by sexual harassment, which they remanded for further fact finding. The case eventually found its way to the New Jersey Supreme Court, where it developed into a monumental case in New Jersey court history.

Upon review of the case, the New Jersey Supreme Court was concerned about the inadequately defined standards of the hostile work environment division of sexual harassment claims under the New Jersey Law Against Discrimination. The justices created a new standard with four prongs to better direct the legal system in these cases. They ruled that in order to state a claim for hostile work environment sexual harassment, a plaintiff must allege that the complained-of conduct (1) would not have occurred but for the employee’s gender; and it was (2) severe or pervasive enough to make a (3) reasonable woman believe that (4) the conditions of employment are altered and the working environment is hostile or abusive. The first prong requires a preponderance of evidence to suggest that the conduct was gender based, and insinuates that if a defendant treated all of their employees equally regardless of gender, the case would fail based on this initial requirement. The second prong allows for two situations to constitute harassment, which are (1) one action that is serious and extreme enough to alter the conditions of employment on its own, and (2) multiple moderate actions that over time create a hostile work environment. The third prong creates an objective standard that evaluates the conduct itself as opposed to the impact that it had on the victims, and that is flexible enough to evolve to the public’s demands. The final prong ensures that a victim need not experience an economic loss or a drastic alteration to psychological well-being, but requires only that the conditions of employment had been changed as a result of the harassing conduct. The case holding acknowledges that the treatment of other women in the workplace may legitimately impact these conditions as well.

Ultimately, the New Jersey Supreme Court reaffirmed the ruling of the appellate court in Lehmann’s case, and remanded the case to a trial court for it to be re-assessed based on the newly defined standards. The importance of Lehmann’s case lies in the creation of the standard that has dictated the way in which sexual harassment cases have been handled in the New Jersey court system in the last 25 years. It presented a more liberal standard in comparison to the federal law, and provided for a flexible code to allow the legal field to respond to changes in the social and political environment. Lehmann made it much easier for sexual harassment cases to prevail in New Jersey, and caused an increase in the amount of harassment complaints filed in the state. Further, Lehmann forced employers to take steps towards preventing this type of behavior, such as instituting company policies and harassment trainings.

Despite the leaps forward that were brought by Lehmann’s case, assessing whether a sexual harassment claim can be brought as well as if an employer can be held legally responsible for workplace sexual harassment will remain a fact sensitive inquiry.  If you or a family member are the victim of sexual harassment, it is imperative that you seek advice and counsel from an experienced New Jersey sexual harassment lawyer. 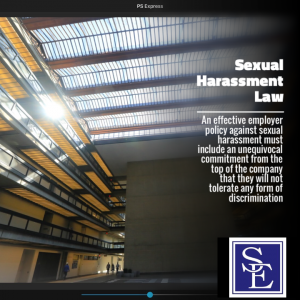