On February 19, 2019, Governor Phil Murphy signed into law an extensive expansion of New Jersey’s paid Family Leave Insurance program and amends the New Jersey Family Leave Act. The New Jersey paid family leave program, which is about 10 years old, provides employees with paid leave for qualifying reasons to care for a newborn, adopted child or sick relative.  The New Jersey Family Leave Act, which was adopted in 1989, provides for eligible employees the right to take up to 12 weeks off from work in a 24 month period in order to care for a family member who is suffering from a serious health condition or upon the birth or adoption of a child.The new expansion of the paid family leave law extends paid benefits to eligible employees from six weeks to twelve weeks.  The new law will also make the benefits payable at a higher rate. Currently, benefits pay out two-thirds of an employee’s pay, capped at $633 per week. The enhanced benefits will entitle eligible workers to 80% of their wages, up to $860 per week. Further, the law was also expanded with regard to intermittent leave, increasing the entitlement from 42 days to 56 days, beginning July 2020.

In 2008, New Jersey followed in California’s footsteps and became the second state to enact paid family leave. Unfortunately, awareness of the program and its benefits has not been widespread. A 2017 study showed that only 12% of New Jersey’s eligible new parents were receiving family leave benefits. The recent enhancements signed by Governor Murphy were previously vetoed in 2017 by then Governor Chris Christie, who stated that such an expansion would be too expensive for New Jersey workers to bear.

The amendments will also change the New Jersey Family Leave Act by providing job protections to employees of private businesses that have at least 30 employees.  This change in the New Jersey Family Leave Act will become effective as of June 30, 2019.  This change represents an expansion over the old law, which only provided protections to employees of private businesses with at least 50 employees.  The program is funded through payroll deductions paid by every single New Jersey employee.  As of January 1, every New Jersey worker is contributing based on their initial $34,400 in wages, for a maximum contribution of $27.52 per year.

The Bill’s passing marks another legislative achievement for New Jersey workers under Governor Murphy’s administration. In the past year, New Jersey has passed the Equal Pay Act, increased the minimum wage and passed the earned paid sick leave law.  After signing the bill into law, Governor Murphy tweeted, “This will put New Jersey at the forefront of the Nation with a paid leave program that serves the needs of families & is good for businesses. Paid leave can ease financial burdens & provide peace of mind for working families at critical times in their lives.”

Governor Murphy, however, has not yet signed the NDA bill, which remains on his desk.  The NDA bill seeks, among other things, to end the practice of requiring employees to agree to confidentiality as part of a settlement agreement of sexual harassment and other discrimination lawsuits.

With the rollout of the new enhancements of paid family leave and to the New Jersey Family Leave Act, our New Jersey disability and discrimination lawyers remain at the ready to assist in helping employees understand their rights to leave and job protection under the law. If you need assistance from our New Jersey employment lawyershttps://www.jerseyemploymentlawyers.com/photos/jersey_family_leave_act-big.jpg, please contact us regarding your situation. 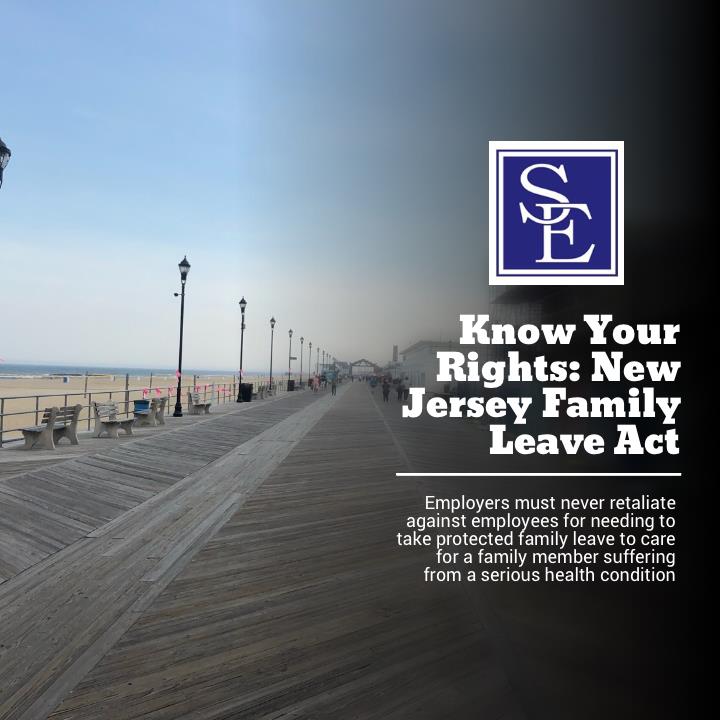