In Manchester, a township in Ocean County, New Jersey where 92% of its approximately 43,000 residents are white, a star high school basketball player’s attempt to support Black Lives Matter was shut down by the Board of Education. At the most recent Board meeting, Destiny Adams, a Black student, presented a passionate speech to the Board about the issue of systematic race discrimination to persuade them that the girls basketball team should be permitted to wear Black Lives Matter sweatshirts during the pregame warmup to their first game of the season, which took place Tuesday, January 26. Destiny was supported at the meeting by her mother, an attorney, and her father, the principal of Manchester High School, both of whom also spoke to the Board. Without discussing her proposal among the members of the Board or taking an official vote on it, the Board denied her request, stating that warmup gear may only display the school’s name. 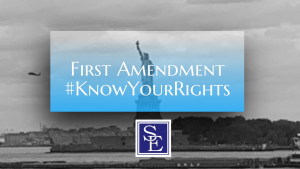 Destiny was undeterred from the Board’s attempt to restrain her from exercising her First Amendment rights.  In speaking to news media, she said of the Board’s decision, “They told me no, but that can’t really silence me, so we needed to find a way around it”. In fact, Destiny and most of her teammates wore Black Lives Matter sweatshirts prior to their season opener last night against Jackson Liberty High School despite the Board’s ruling. Destiny and another teammate also wore socks that said Black Lives Matter, while another player wrote Black Lives Matter on her sneakers. The Board has not yet commented on the team’s decision to go against the Board’s directive.

According to the New Jersey State Interscholastic Athletic Association, what players wear during pregame warmups is determined at the school’s discretion. From a legal standpoint, however, the question is how to balance public school students’ First Amendment right to freedom of expression with a school’s right to ensure the school environment is not disrupted and the rights of one student do not infringe on the rights of another.  Here, Destiny clearly has the better legal argument that her speech is protected under the First Amendment and the New Jersey Civil Rights Act.

The U.S. Supreme Court has ruled that public school students “do not shed their constitutional right to freedom of speech and expression at the schoolhouse gate.” However, students’ constitutional rights are generally more restricted than the rights of citizens outside of the school setting. Where a student’s speech or expression will “materially and substantially interfere with the requirements of appropriate discipline in the operation of the school” the school has a right to limit free speech. Additionally, “restrictions on speech during a school’s organized, curricular activities are within the school’s legitimate area of control because they help create the structured environment in which the school imparts basic social, behavioral, and academic lessons.” The school board is the body that is charged with determining what speech is improper, but obviously must make these decisions in accordance with the law.

This balancing of interests can sometimes be complicated as a result of a school’s desire to maintain the status quo or to avoid sensitive topics being discussed in schools while not to infringe upon student’s constitutional rights. In providing guidance on how to implore the balancing test, “the Supreme Court has identified three ‘narrow’ circumstances in which the government may restrict student speech even when there is no risk of substantial disruption or invasion of others’ rights.” First, a public school may restrict profanity and lewd speech. Second, a school may regulate any speech that could reasonably be interpreted as being made by a school representative advancing a viewpoint of the school itself. Third, a school may disallow speech advocating illegal drug use. Destiny Adams’ First Amendment expression in this case is her displaying of the phrase “Black Lives Matter” on her clothing during her pregame warmup. Looking to court decisions in New Jersey, speech exercised during a school-sponsored athletic event falls within the control of the Manchester Board of Education, and they are entitled to ensure that appropriate discipline is not disrupted. However, normal political controversy or tension created by student speech is not a sufficient reason to silence the team. Further, speech about social justice or political interests is one of the most consistently protected types of speech.

Two years ago, another New Jersey district found itself defending a lawsuit brought by a high school student who was suspended after repeatedly conversing with her classmates about Black Lives Matter and in one instance, using the term “pig” to refer to a corrupt police officer character in a play. In K.C. v. Hackettstown, the defendant school board asked the court to dismiss student K.C.’s complaint against them for violation of her First Amendment rights. The school board argued that her punishment was justified by the school’s obligation to prevent disruptive behavior. The Court disagreed, finding that the complaint alleged sufficient facts to allow K.C. to move forward with her lawsuit. Specifically discussing her conversations about the Black Lives Matter movement, the Court stated, “it can hardly be argued that discussions involving political or social justice matters do not fall within the protections afforded under the First Amendment.”

It remains to be seen what additional events will transpire in Manchester now that Destiny and her teammates have refused to allow their First Amendment rights to be stifled by the school board. Destiny’s decision to use her voice despite being told she could not is a strong step toward improving school board awareness and protecting public school employees’ and students’ rights to freedom of speech and expression.

For case law, in the order relied on: