Discrimination in the workplace is a persistent, often insidious issue that can create an atmosphere so unwelcoming or intimidating for the individual being targeted as to render the environment incompatible with cultural values of equality and fairness. When this happens, the employee that has suffered the discrimination and harassment has a legal avenue for restitution by bringing a claim for hostile work environment discrimination under various federal and state statutes including the New Jersey Law Against Discrimination. As our world evolves to become more reliant on virtual platforms and remote interaction, however, we need to adjust how we define the parameters of the workplace. If an individual is harassed or discriminated against for his or her sexual orientation in a brick and mortar office, for instance, that misconduct is clearly happening in the workplace. If the employer has notice and does nothing to stop it, that employer is liable for creating a hostile work environment. What if the same individual suffers the harassment in an online location dedicated to helping employees carry out the functions of their jobs while working remotely? Can the employer be held liable for hostile work environment claims that arise from employee conduct online? Under certain circumstances, the answer is yes. 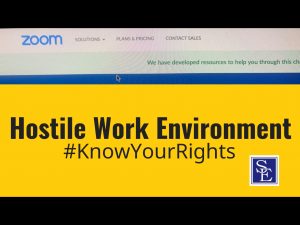 For any hostile work environment claim, a plaintiff employee must show that harassing and discriminatory conduct occurred because of some protected characteristic, such as gender, sexual orientation, religion, race or disability, and that a reasonable person in the plaintiff’s shoes would consider the harassment and discrimination sufficiently severe or pervasive as to alter the conditions of employment and create an intimidating, hostile or offensive working environment. Of course, the conduct must occur either at work or at an event or function tied to work. When employers and employees are operating more and more frequently in a virtual world, we must consider to what extent virtual meeting places, events and work-related platforms are considered the workplace for purposes of hostile work environment claims.

In New Jersey, instructive case law on this topic was first decided twenty years ago in the matter of Blakey v. Continental Airlines, Inc. In that case, a female pilot brought claims against the airline under both federal discrimination laws for hostile work environment sexual harassment and state common law claims for defamation. In the lawsuit, Blakey argued that her employer was liable for creating the hostile work environment despite the fact that much of the harassment took place in an online forum used by Continental Airline’s pilots to share work-related information rather than in physical workspaces shared by employees.

The Supreme Court of New Jersey held that although the online forum did not have a physical location within the airport terminal, hangar or aircraft, it might nonetheless have been so closely related to work that harassment on that forum could be regarded as occurring in the workplace. Therefore, if the airline had notice that employees were engaging in harassment on a work-related forum, the employer would have a duty to remedy that harassment and would be liable under a claim for hostile work environment. The key issue for the Court was whether the relationship between the online forum and the employer established a connection with the workplace sufficient to impose liability. The Court analogized message boards in online forums to bulletin boards hanging in staff lounges. It noted, “If there were at that small airport a lounge used exclusively by the pilots and crew of that airline and a bulletin board in that lounge contained the same or similar comments and asides by the pilots and crew, there would be little doubt that if management had notice of messages that met the required substantive criteria of being ‘sufficiently severe or pervasive to alter the conditions of employment and to create an intimidating, hostile, or offensive working environment,’ a cause of action for hostile work environment sexual harassment could be asserted. . . .To repeat, employers do not have a duty to monitor private communications of their employees; employers do have a duty to take effective measures to stop co-employee harassment when the employer knows or has reason to know that such harassment is part of a pattern of harassment that is taking place in the workplace and in settings that are related to the workplace.” The workplace and settings related thereto include online forums.

Bringing this same issue into the current employment climate of virtual platforms and working remotely, we see that platforms such as Zoom, Google Meet or Cisco Webex present a slightly new variable. Where employees conduct meetings and attend presentations online while maintaining the ability to ask questions or converse through “chat” functions, what is the employer’s liability when employees use these online tools for improper and discriminatory purposes? A recent incident in Dumont, New Jersey may end up being illustrative.

Mayor Andrew LaBruno has called for an investigation into two teachers at Dumont High School after they exchanged homophobic comments ridiculing one of their colleagues and her family through the chat function on the Zoom platform. Because the comments were made during a Zoom class, students were able to view them and at least one student captured the harassment and showed it to school officials. Mayor LaBruno has called on Dumont Superintendent of Schools Emanuele Triggiano to launch a full investigation into the teachers’ conduct. Although that investigation is still ongoing, over 17,000 people in the community have signed a petition urging administration to fire the perpetrators of the harassment. As of this writing, the teacher targeted by the online harassment has not filed a lawsuit for hostile work environment, and no other instances of harassment or discrimination against her have been made public. If she was inclined to consider filing a complaint for hostile work environment harassment against Dumont public schools, she would have to prove that her colleagues’ behavior was so intimidating or threatening as to alter her work environment and that her employer had notice and failed to address it. In addition, she would also have to show that not only Zoom classes, but also the digressive conversations that might occur using the chat function during those classes, are integral to her workplace.

Although the circumstances of the Dumont incident present a new hurdle for victims of harassment and discrimination, law in New Jersey creates a strong foundation on which to base claims for hostile work environment when online and virtual platforms bear a strong relation to the job and are misused by employees to target others based on protected characteristics.