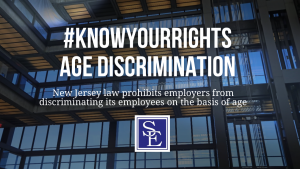 Google, or Alphabet, Inc., is one big technology corporation that has been hit hard with age discrimination suits over the last few years. The most recent of which, Robert Heath v. Google, Inc., finally reached a settlement on Friday, July 19th, in California. The current settlement offer would force Google to pay $11 million to job applicants who allege that they experienced age discrimination during their application processes.

Believing the poor conduct of the interviewer to be part of a greater trend of age discrimination designed to strip older applicants of the chances to be hired by the company, Mr. Heath and his counsel conducted a deeper investigation into the hiring practices of Google’s recruitment team as related to age discrimination. They found that the median age of Google employees in 2013 was 29 years old, while the median age of all U.S. workers was 42.4 years old. In addition, it was found that it was widely acknowledged by Google employees that the term “cultural fit” was regularly used to justify the choice not to hire, or even to terminate, workers who were above the desired age of employment at Google.

The case comes after a high-profile age discrimination lawsuit was filed by Brian Reid against Google in 2004. Mr. Reid was the Director of Operations and Director of Engineering at Google for several years and had experienced pervasive age discrimination while employed in this capacity. Mr. Reid reported preferential performance reviews and salary bonuses for employees under 40 years old, as well as negative statements made by executives regarding older workers. For example, the VP of Engineering at Google had told Mr. Reid on numerous occasions that his opinions and ideas were “obsolete” and “too old to matter”. In a performance review, Mr. Reid was told that “Google is different: Younger contributors, inexperienced first line mangers, and the super-fast pace are just a few examples of the environment.” Mr. Reid was eventually terminated due to a lack of “cultural fit”. Emails between department heads reveal that there seemed to be no definitive reason for the termination, and supervisors discussed false reasons to provide for denying Reid an alternate position in the Company.

Examples like these demonstrate the systematic pattern of discrimination against workers over the age of 40 that has occurred at Google, Inc. While Google justifies such discrimination as a manifestation of the “culture” that the company seeks to establish, it remains undeniably unlawful. Employers must maintain a viable reason for terminating an employee, that does not include a protected characteristic such as age or race.

Google is far from the only employer that practices unlawful age discrimination. IBM is another corporation that has come under fire in recent years. After falling behind in competitiveness with other Big Tech companies, IBM engaged in a period of layoffs and terminations that caught the attention of the public. After several laid off employees filed complaints with the EEOC alleging age discrimination, ProPublica conducted an investigative report  into IBM’s policies related to aging employees.

The investigation revealed that the layoff systematically targeted older employees in a process characterized by an administrative desire to make the IBM workforce more in line with the “millennial mindset”. To IBM managers, this meant that older employees needed to go. ProPublica found that IBM (1) targeted older workers, even high performers, for layoffs while hiring young replacements, (2) denied older workers information that they are legally entitled to that would allow them to decide whether they’ve been victims of age bias, (3) systematically hid the amount of employees that were being laid off, as well as their demographics, (4) encouraged employees targeted for layoffs to apply to other positions within IBM while advising managers not to hire them, (5) advised employees that their skills were out of date, but then hired them as contract workers at a lower pay with fewer benefits, and (6) required employees to sign arbitration agreements requiring them to settle any complaints of age discrimination in arbitration. Altogether, these policies resulted in the wrongful termination of hundreds of ageing workers, while severely limiting or even abolishing their opportunities to pursue age discrimination complaints within the legal system.

Our New Jersey employment lawyers will continue to monitor current trends and proposed legislation relating to age discrimination throughout the country.